George Forest Hamilton of Westborough was installed as the 91st Grand Master of Masons in Massachusetts in a ceremony held on December 27 at the fraternity’s Boston headquarters. He will preside over more than 200 lodges and 20,000 members throughout the Commonwealth, Panama, Chile, Guantanamo Bay Naval Base, and Japan for the next three years. Hamilton is successor to Past Grand Masters Paul Revere and General Joseph Warren. 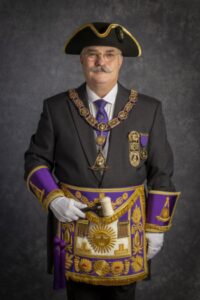 As Grand Master, Hamilton has two distinct, yet equally important, responsibilities. First, he serves as the fraternal leader of the institution. In this capacity he ensures the activities that take place within the jurisdiction comply with the Constitutions and Regulations of the Grand Lodge as adopted in 1792 and amended through 2022. He also has numerous ceremonial privileges reserved for his position.

His second responsibility is leading the business of Grand Lodge, including:

Hamilton was raised in Northborough and graduated from Algonquin Regional High School. He received a Bachelor of Science in Electrical Engineering from the University of Lowell. Following college, he began working for GTE Corporation (now General Dynamics) in Needham. He retired from General Dynamics as Senior Director of Engineering after more than 30 years with the company.

In 1984 he began his Masonic career by joining Alpha Lodge in Framingham. He served as the Worshipful Master, or presiding officer of the lodge, in 1988 and 1989. Masons use the original definition of the word worshipful, meaning “honorable”. English mayors and judges are addressed by the title of “Worshipful” even today. As Grand Master, members of the fraternity will call Hamilton “Most Worshipful”.

He is also a member of several other Masonic lodges, including The Scouters Lodge, Holden, Siloam Lodge, Westborough, The Master’s Lodge, Needham; he is a charter member of The Lodge of the Royal Secret, Boston.

His service to the Grand Lodge began in 2007 when he was appointed Grand Standard Bearer. In 2018, he was selected to serve on the Grand Lodge Board of Directors – a position he held until he was installed as Grand Master. In 2020, he was elected Senior Grand Warden of the Grand Lodge, the second highest elected position a Mason can hold in the state.

He is a member of the York Rite’s Concord Chapter of Royal Arch Masons, Adoniram Council of Royal and Select Master Masons, and Saint Bernard Commandery No. 12, Knights Templar. He also belongs to Aleppo Shriners, Wilmington.

Hamilton married his childhood sweetheart, Theresa Marie Warren. They made their home in Framingham where had two sons: Benjamin Warren Hamilton (Brighton, MA) and Thomas Forest Hamilton (Manchester, NH). In 1995 the family moved back to George and Theresa’s hometown of Northborough where they raised their sons. They now reside in Northborough. He has been involved with Boy Scout Troop 101, Northborough, since childhood. He earned the rank of Eagle Scout and is now an Assistant Scoutmaster. He is a member of the United Methodist Church of Westborough and the National Society Sons of the American Revolution.