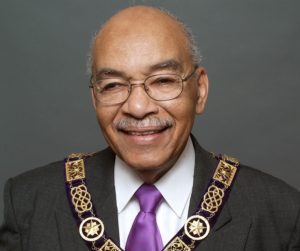 The roll of the workmen has been called and one Master Mason has not answered to his name.

He began serving Grand Lodge in 1982 when he was appointed a Grand Steward by M.W. J. Philip Berquist, Grand Master. He served as District Deputy Grand Master of the Greenfield 14th in 1986-1987. In 1989, he was named Grand Representative for the Grand Lodge of Arizona.

In 1994, he served as Junior Grand Warden, the third highest elected position in the jurisdiction. That same year he received the Henry Price Medal, the highest award that can be bestowed.

At the conclusion of his year as Junior Grand Warden, Brother Scott was named a Grand Lecturer. He held the position until 2012 when he was named Grand Lecturer Emeritus, along with R.W. Robert Johnston.

He joined the Scottish Rite, Northern Masonic Jurisdiction, Valley of Greenfield, in 1984. He also received his 32° in Springfield Consistory, Valley of Springfield that same year. He served as Thrice Potent Master of Lodge of Perfection and Most Wise Master of Rose Croix. For his contributions to the Valley he received the Meritorious Service Award from the Massachusetts Council of Deliberation in 1992, the highest honor the state can bestow. He was subsequently coronated a 33° in 1995 at the Annual Session held in Milwaukee, WI. He held the position of Valley Secretary from 2006-2014.

He retired from the University of Massachusetts Amherst as the Director of Engineering Technical Support Services in the College of Engineering.

Don was married to the former Judith Milner and was the father of five children.