John Frederick Sullivan of Morning Star Lodge, Worcester was installed Deputy Grand Master of Masons in Massachusetts for 2022 in a ceremony performed at the fraternity’s Boston headquarters. The Deputy 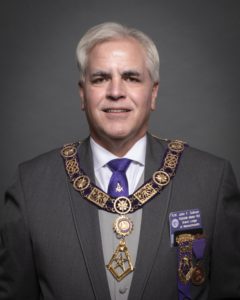 Grand Master is the second-highest ranking officer of the Grand Lodge of Masons of Massachusetts, comprised of 22,000 members belonging to 205 lodges throughout the state.

Brother Sullivan began his Masonic career in 2007 when he joined Worcester’s Morning Star Lodge. He held several junior officer positions, eventually serving as the Lodge’s Worshipful Master, or presiding officer, in 2015 and 2016. Freemasons use the original definition of “Worshipful,” meaning honorable; British mayors and judges are still addressed as Worshipful. As Deputy Grand Master, Sullivan will be called “Right Worshipful”.

In 2017 and 2018, he was District Deputy Grand Master of the Twenty-third Masonic District, comprised of the following Lodges: Trinity Lodge, Clinton (chartered in 1778), Morning Star, Worcester (1793), Franklin Lodge, Grafton (1851), Quinsigamond Lodge, Worcester (1870), Boylston Lodge, West Boylston (1876), Matthew John Whittall Lodge, Shrewsbury (1928), and Level Lodge, Shrewsbury (1952). There are 33 districts in the state, each led by a District Deputy Grand Master, who is the personal representative of the Grand Master to the lodges in his district.

In 2020, Sullivan received the Joseph Warren Medal for Distinguished Service. Named for the Patriot killed during the Battle of Bunker Hill, Warren was the presiding Grand Master at the time of his death. The medal recognizes exceptional service at the lodge level. The Grand Master confers the award on the recommendation of the lodge Master.

Active in several Masonic organizations, the Deputy Grand Master is a member of the Ancient and Accepted Scottish Rite, and was the presiding officer of the Lawrence Chapter of Rose Croix, Worcester, between 2012 and 2014. He was awarded the honorary 33° in 2017 at the Annual Session of the Supreme Council of Scottish Rite Freemasonry in Rochester, NY. He belongs to the York Rite’s Eureka Royal Arch Chapter, Worcester, Hiram Council of Royal and Select Master Masons, Worcester, and St. Bernard Commandery #12 of Knights Templar, Boston. He is an Aleppo Shriner, Wilmington. Sullivan is also a charter member of The Lodge of the Royal Secret, Boston, an honorary member of Franklin Lodge and Trinity Lodge, and an affiliate member of The Master’s Lodge, Needham.

A native of Worcester, Sullivan graduated from Burncoat High School. He received an Associate in Science degree from Quinsigamond Community College, a Bachelor of Science in Fire Science from Anna Marie College, and a Master of Public Administration from Clark University.

In addition to his Masonic activities, he also volunteers in the community. He was a community representative for Worcester Head Start and the American Cancer Society; a CPR Instructor and Trainer for the American Heart Association; and a coach for various Worcester youth sports teams.

Brother Sullivan lives in Worcester with his wife, Louise.