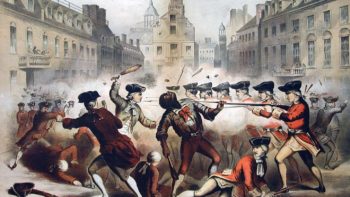 The Boston Massacre on March 5, 1770, is one of the most famous events in American history. But many details about what happened remain mysterious. Was it the first fatal violence of the Revolution? What do we know about the most famous victim, Crispus Attucks? The soldiers and all those who were shot were men; what role did women play? What do we know about the famous engraving made by Paul Revere? How did Revolutionary leaders like Dr. Joseph Warren keep the memory of the Massacre alive? And how did the idea of martyrdom shape the cause of American liberty?

The Revolution Speaker Series is proud to announce its inaugural lecture, “Boston’s Revolutionary Martyrs,” will be held at five locations between Friday, March 4 and Sunday, March 6 to commemorate the 250th anniversary of Dr. Joseph Warren’s first Boston Massacre Oration in 1772, including:

The event will feature multiple talks focusing on some of the lesser known and understood aspects of the Boston Massacre:

The events are open to the public. Join the presenters as they discuss and explore how that “Bloody Massacre perpetrated in King Street…” became an indelible part of our national memory. Tickets are $15 and may be purchased using the links embedded in the schedule above. The New Bedford event is free of charge.

The Revolution Speaker Series is a partnership between the Dr. Joseph Warren Foundation, Revolution 250, the Massachusetts Society Sons of the American Revolution, and the Massachusetts Freemasons. Designed to commemorate the approaching 250th anniversaries of the iconic events that led to American Independence, the series will feature scholars, historians, and authors who will explore those revolutionary moments in early American history.

Each event will display artifacts, documents, and period pieces previously unavailable for public viewing. The sponsoring organizations are working together to pool resources and collections to enhance the experience and deliver unique and engaging content.

Dr. Robert J. Allison is a professor of history at Suffolk University and teaches at the Harvard Extension School. He has written several books, including The Boston Massacre and The Boston Tea Party. He is the Chair of Revolution 250, president of the Colonial Society of Massachusetts, and a Life Trustee of the USS Constitution Museum.

J.L. Bell maintains the blog Boston1775.net, offering daily posts of history, analysis, and unabashed gossip about the era of the American Revolution in New England. He is the author of The Road to Concord: How Four Stolen Cannons Ignited the Revolutionary War and numerous articles.

Jonathan Lane has more than 30 years’ experience in public history, tourism, and cultural programming. His employment has led him to the Plimoth Plantation, the American Antiquarian Society, and the Massachusetts Historical Society. He is the Coordinator of Revolution 250, a consortium of more than 70 organizations across the Commonwealth, working together on the commemoration of the 250th Anniversary of the American Revolution.