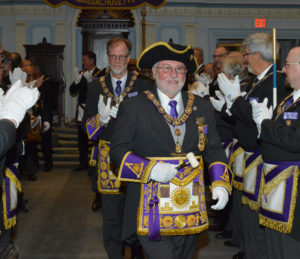 The June 2021 Quarterly Communication of the Grand Lodge began promptly at 1:30pm in the afternoon. The Grand Lodge officers were very pleased to be able to get back into Ionic Hall at full capacity for the first time since December of 2019.

One of the things that will be staying with us from the past year? The meeting was streamed online through MassMasons.org, for all Master Masons logged into the platform to view, wheresoever dispersed.

The Massachusetts Consistory Guard presented the colors to the East of Grand Lodge, represented by:

Following the playing of the national anthem, the Grand Master introduced the color guard, and proceeded with the formal opening of Grand Lodge.

After the opening, he proceeded to introduce the illustrious guests in attendance for the ceremony. When he finished, he then moved on to committee reports.

The first report was read by the Grand Secretary, M.W. Albert T. Ames, and it was regarding the voting power of Lodges. Next, R.W. Peter J. Lawson read the report of the committee on charters and by-laws. A report from the committee on records was then delivered by R.W. W. Warren Richardson.

Following this business, a somber duty fell upon the Deputy Grand Master, R.W. Peter Culbertson. He delivered the quarterly necrology report – and unfortunately six brethren were on the list.

Two of them were permanent members of our Grand Lodge – R.W. H. Robert Huke, III and R.W. Donald B. Scott each had a memorial read by the Grand Historian, R.W. Walter H. Hunt. Following the memorial presentations, the Grand Master asked for a moment of silence, and then called on the Grand Chaplain to deliver a non-denominational prayer.

First, a special presentation by Forest Lodge #166 (Fredonia, NY) and our own Star of Bethlehem Lodge took place.

The Grand Master asked the Grand Marshal to escort Wor. David Ludemann and Wor. Paul Scheeler, the Lodge Historian and Lodge Archivist of Forest Lodge #166 to the East of Ionic Hall. He also asked for Star of Bethlehem Lodge’s officers, represented by Wor. Alan Gray to accompany them.

Brother Gray was presented William B. Cushing’s Masonic Diploma by Forest Lodge #166. Cushing, a Civil War hero, was a member of Star of Bethlehem Lodge. 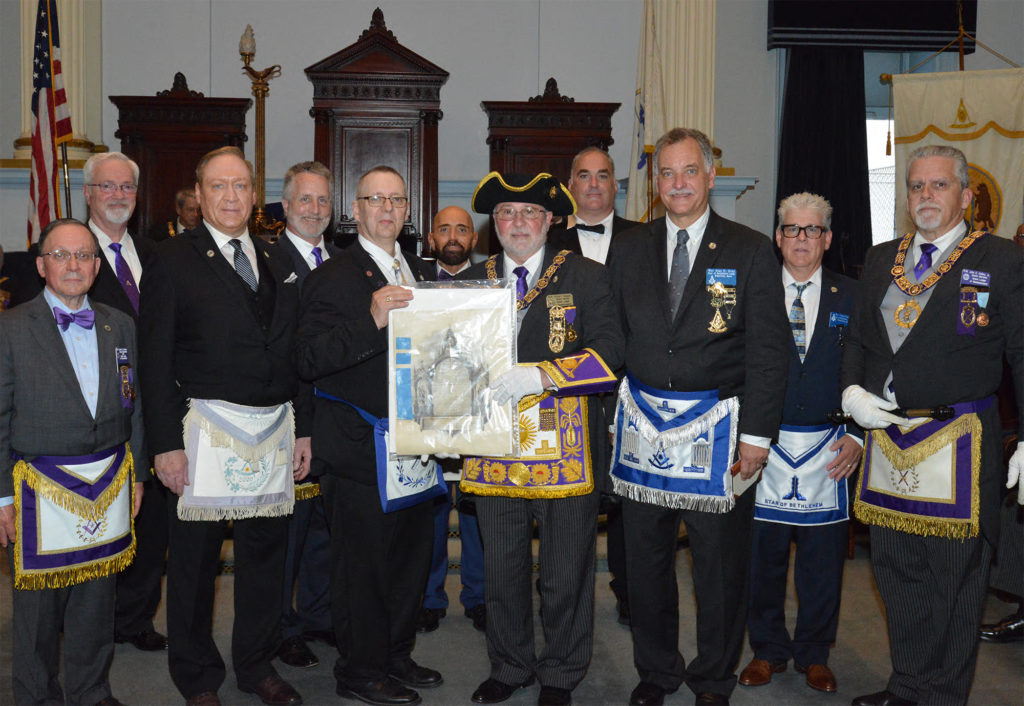 R.W. Donald M. Moran then read a proclamation from the Massachusetts State Senate on behalf of Senator Bruce Tarr (Tyrian-Ashler-Acacia Lodge). Copies of the proclamation were then given to representatives of every Masonic body involved in the presentation.

Next, M.W. Paul F. Gleason made some remarks about the George Washington Masonic Memorial in Alexandria, VA. When he was finished, the Grand Master surprised him by presenting him with his Veteran’s Medal, as this year is Bro. Gleason’s 50th anniversary of being raised a Master Mason.

M.W. Richard Maggio then asked the Grand Marshal to escort Kenneth Sallale and Oscar Zepda to the East of Ionic Hall.

Bro. Sallale was announced as the Grand Representative of the Grand Lodge of Malta.

The following Lodges all celebrated milestone anniversaries recently. The Grand Master was happy to honor them with certificates for the occasion:

The Grand Master had a trio of special presentations to make next.

First, he welcomed R.W. Ernest Pearlstein to the East of Ionic Hall. He thanked him for his role in helping Grand Lodge organize their participation in the town of Wilmington’s Memorial Day Parade. He was presented with a certificate recognizing his role has Parade Coordinator, and Liaison to the Grand Master for the Aleppo Shriners.

Next, R.W. Donald Stevens was escorted to the East. He was issued a certificate of appreciation for advising the Grand Master during and in the aftermath of COVID pandemic related restrictions.

Last, but certainly not least, R.W. Elliott Chikofsky was presented a certificate recognizing his years of service hosting MassMasons.org. He was then given the Henry Price Medal, the highest honor that the Grand Lodge is able to give. 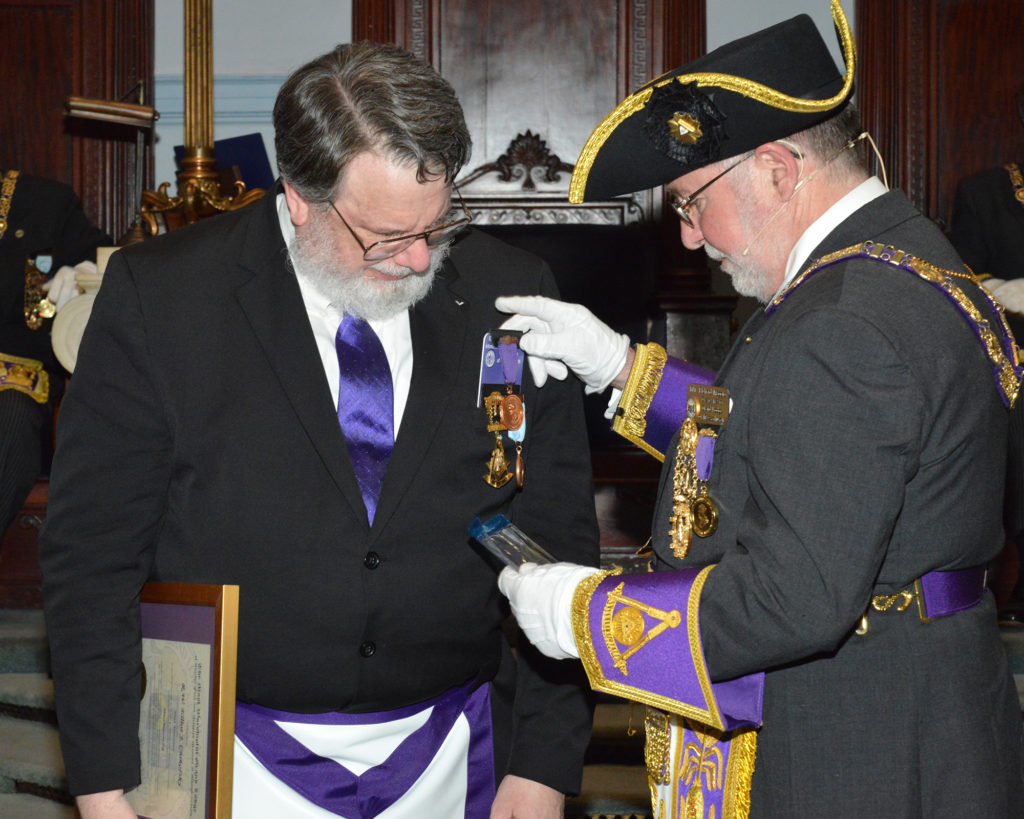 Several Lodges and Masonic organizations then came forward with contributions for the Brotherhood Fund to present to the Grand Master.

The Grand Master resumed his station in the East, and delivered his remarks to the assembled brethren.

He announced that he is likely to approve dispensation requests related to reading and balloting on candidates for the One Day Class and to process more than 5 candidates at a time. All requests must be emailed to his Executive Assistant, James Orgettas, then followed up with a letter to Grand Lodge in the mail.

He reminded Lodges to make sure they follow up with every person who asks about how to become a Freemason.

Next, he shared that a copy of an approved ceremony called “The Empty Chair Degree” would be made available via MassMasons.org. The ceremony dates to the Civil War era, and is often performed to recognize Masons who lost their lives while serving in the military.

M.W. Bro. Maggio then delivered a rundown of all his travels and activities since March’s Quarterly communication.

He also gave several key events and programs, and requested everyone “save the date” for each of them. They are:

MassMasons.org is introducing the Idea Store – an indexed catalog of over 700 ideas and programs that have proven successful in other Lodges and Districts.

In addition, a new section is being added to all member profiles. Everyone will have the ability to submit their interests and skills to the platform. When populated, this will allow us to find and capitalize on potential affinity groups with new opportunities to participate in the Craft.

Hybrid Lodge meetings will be permitted to continue even though pandemic restrictions have been lifted. Grand Lodge will also continue to stream the Quarterly Communications, but voting will be conducted in person only moving forward.

Masonic license plates are still available from the Massachusetts Registry of Motor Vehicles. The Grand Master asked anyone who has not yet done so to consider showing their pride in our fraternity, as well as supporting our charities through their plate. A portion of all plate registration fees gets returned to the Masonic Education & Charity Trust.

The Grand Master ended his remarks with some words of wisdom: